Won’t support the micro SIM used with the Iphone 4 and Iphone 4S handsets. 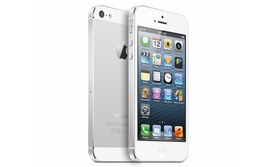 ONE OF THE LESS PUBLICISED FEATURES of the Apple Iphone 5 is its use of a new, smaller nano SIM, which means that Iphone 5 buyers will need to get hold a new SIM card before they will be able to use the device.

The new nano SIM card is around 40 percent smaller than the micro SIM used in the Iphone 4 and Iphone 4S, which has helped Apple shrink the size of its latest smartphone.

The European Telecommunications Standards Institute (ETSI) explains, “Today’s SIM card designs take up a significant amount of space inside a mobile device. This space is more and more valuable in today’s handsets which deliver an ever increasing number of features.”

While this is all well and good, it looks set to prove a nuisance for early adopters. Those who pick up the device SIM free from an Apple store on 21 September will then need to get a nano SIM before they can use it, rather than being able to transfer the SIM from their previous smartphone.

However, Vodafone has assured us that it has 500,000 nano SIM cards ready and waiting for Iphone 5 launch day. We’re yet to hear back from O2, EE and Three.