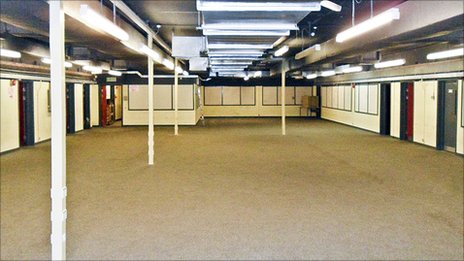 A bunker built for Scottish Office staff in the event of a nuclear attack is up for sale.[break]

The bunker has its own canteen and dormitories.[break]

The complex at Cultybraggan Camp near Comrie, Perthshire, was completed in 1990 and is believed to be one of the most advanced structures of its kind.[break]

It was built to house 150 people and protect them from nuclear, biological and electromagnetic attacks.[break]

Comrie Development Trust, which owns the bunker, said the asking price was £400,000.[break] 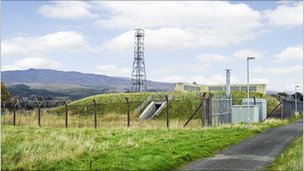 The bunker was built on a former prisoner-of-war camp.[break]

The trust bought the facility – along with the former prisoner-of-war camp where it was built – in September 2007 for £350,000.[break]

The community will continue to own and develop the camp for community projects.[break]

Andrew Black, from property consultancy Carter Jonas, said the bunker would have had its own BBC studio, telephone exchange, canteen and dormitories.[break]

Its aim would have been to protect the people charged with planning the rebuilding of a “post-apocalypse Scotland”.[break]

“This really is a unique property, with over 13,000 square feet of space on each of its two floors, air filtration plants, backup generators and water storage tanks,” Mr Black said.[break]

“It only went on the market this week but we have already had interest from the USA and Germany, as well as the length and breadth of the UK, with a wide variety of ideas and proposals for possible usage.”[break]

Mr Black said the bunker would make an ideal location for secure data storage, a wine warehouse – or anyone with a “nervous disposition”.[break]