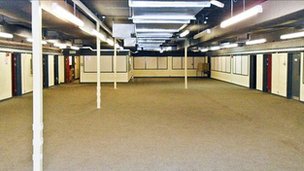 A bunker built to protect Scotland’s leaders from nuclear threat is now set to become a digital safe house, it has been revealed.[break]

The shelter at the former prisoner-of-war camp at Cultybraggan, near Comrie in Perthshire, will be used to store confidential computer files.[break]

The complex went on the market nine months ago.[break]

GCI Com said the high-security data centre would provide its clients with a recovery service in the event of disaster.[break]

The proposals have been described as a “game-changing prospect” for the Comrie Development Trust, who bought Cultybraggan from the Ministry of Defence through a right-to-buy option in September 2007.[break]

Chairman Alan Caldwell said the deal, which will be a joint venture, would bring vital funds to the trust, as well as providing the rural community with high-speed broadband “equivalent to that of a major city”.[break]

It is hoped the leap forward in technology will boost local businesses that have been held back by poor internet coverage.

Mr Caldwell said: “The operation doesn’t bring jobs with it as it’s all technology-based, but we believe jobs will come to the area due to the broadband speed. There’s 10 acres next to the bunker that is ideal for commercial enterprise.[break]

“It’s an exciting project and potentially a defining moment for the community plan for Cultybraggan Camp.”[break]

The development trust put the bunker on the market with a guide price of £400,000, attracting diverse interest including a South African couple who wanted to live there and an American firm who wanted to use it as a place to flee the apocalypse.[break]

Wayne Martin, chairman of GCI Com, said: “This will bring Comrie and the camp into the national spotlight for a best-in-breed hosting and disaster recovery centre, along with the camp benefiting from access to high-speed data that’s only really available in key cities within the UK.”[break]

The Cultybraggan Camp was set up in 1939 as a maximum security prison and housed up to 4,000 German and Italian POWs.[break]

Last year Comrie Development Trust appointed property consultants to sell the former bunker on the site, which was designed to accommodate up to 150 key officials in the event of a nuclear attack.[break]

It contains a TV studio, canteen, phone exchange and dormitories, as well as decontamination showers, a PA system and a radio mast.[break]