Orange and T-Mobile UK merge to crush O2 and Vodafone 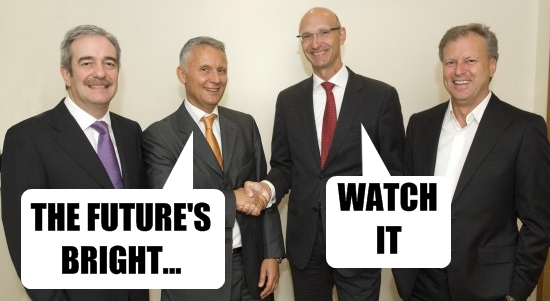 Orange and T-Mobile are to merge. Currently the third and fourth biggest mobile phone providers in the UK, the two companies are being combined by Deutsche Telekom and France Telecom to form the UK’s largest, as-yet-unnamed network, like some kind of Power Ranger-style megazord phone network.

Deutsche Telekom owns T-Mobile, which employs 6,500 workers in the UK, and France Telecom owns Orange, with its workforce of 12,500. T-Mobile has its eye on Orange’s broadband network, while Orange will benefit from T-Mobile’s stake in 3G network Hutchison.

The deal is set to be completed by November, but the companies won’t be fully merged for another 18 months. The new company will be the largest provider in the UK market. It should improve network coverage and potentially mean better customer service with more outlets to choose from, but it’s a pretty safe bet that many of those will get the chop — the companies estimate “synergies with a net present value in excess of £3.5bn”. Although seeing as every British high street now consists of two KFCs, a Primark and 23 phone shops, that may be no bad thing.

According to CNET UK’s sister site ZDNet UK, in the past year T-Mobile UK wrote off £1.6bn and lost 100,000 customers, while Orange’s sales this year were down 2.6 per cent from last year, at £2.2bn. The companies reckon they have roughly 28.4 million mobile customers, which was around 37 per cent of UK mobile subscribers in late 2008 when the figures were gathered. The merger will mean 90 per cent of the UK’s mobile users will be with the new company, O2 or Vodafone, but it’s possible competition will still be fierce enough that the Competition Commission won’t lose any sleep.

We wonder if the merger will offer further opportunities to eject from your contract. But the main question now is what the new company will be called: O-Mobile? Bit generic. T-Orange? Bit Northern. How about T-Morange — Team Orange, geddit?