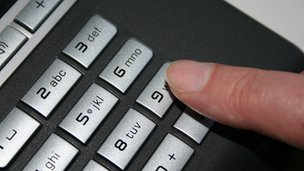 Customers who use phone numbers beginning with 08, 09 or 118 should in future have a much clearer idea of how much their calls will cost.

The telecoms regulator, Ofcom, has confirmed a plan to change the way such calls are charged for.

Up to now it says customers have been confused about how much they pay for these “non-geographic” numbers.

Ofcom says the changes are the biggest for a decade

At the moment customers are not told what they will be charged for using these numbers, unless they are using a landline supplied by BT.

“No one can be sure what these numbers are costing. We want greater transparency,” he told the BBC.

He said the changes were the biggest for more than a decade.

Under new rules to be introduced by the end of next year, the charges for such numbers will be split into two sections.

This will be a fixed fee, charged by the telephone company, for example, four or five pence per call.

Then there will be a service charge, quoted in pence per minute.

This money will go to the company you are calling.

Some companies use this money to pay for the service they are providing, for example a bus, train or ferry timetable.

Other companies, including television game shows, may use it to make a profit.

But when the new rules come in, consumers will know exactly how much they are paying, and where that money will go.

Ofcom believes the changes will increase the transparency of such charges.

“We are shining a light on how these numbers are charged,” the spokesman declared.

Ofcom also believes that the changes will increase the usage of such numbers, as many consumers have been frightened off by not knowing how much they cost to use.

By introducing such transparency, it is also convinced that competition between different operators will improve, which it is hoped will lead to lower prices too.

Ofcom has previously published a guide to try and help people understand the complexity of all the different usage rates.

Another change is that Freephone numbers, such as 0800 and 0808, will not only be free from a landline, but will also be free from mobiles too.

Ofcom has been consulting with the telecoms industry for most of the past year about the changes, but has now confirmed that they will take place.

In June this year it is expecting to announce an exact date when the changes will happen, which is likely to be late 2014, or early 2015.