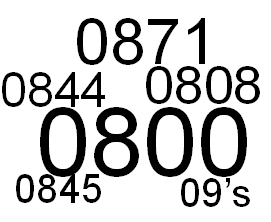 In the United Kingdom, non-geographic numbers (NGNs) are telephone numbers available for private sale which, rather than being assigned to a particular telephone line or circuit, provide callers with a contact number which gives no indication as to the geographical location of the line being called. The owner of the number can retarget the NGN to any other telephone number including mobile, international and even other NGNs at any time therefore enabling them to take their calls on the move or at various locations at different times or simultaneously. NGNs which cost more than 50p (UK) to call are classed as premium rate numbers and usually begin ’09’.[break]

0845 numbers replaced the previous range of 0345 numbers operated by BT and 0645 numbers provided by Cable and Wireless. The older 0345 and 0645 numbers were converted to 0845 numbers as part of the Big Number Change. Until 2004, 0845 numbers were charged at the same rate as a call within the caller’s local call area, and were accordingly described as local rate numbers, or using the BT brand name “Lo-call”. With few companies now charging domestic customers different rates for local and long-distance calls, 0845 numbers can no longer reliably be assumed to cost the same as a ‘local’ phone call and can in some cases cost more. Some fixed line telephone companies have started to include 0845 numbers in bundled call allowances.[break]

The 0870 code was originally introduced as 0990, the code formerly used for Ascot, when it was subsumed into 0344 (Bracknell). 0990 numbers were originally six-digit, and when 0870 was brought in to replace 0990, the six-digit numbers were prefixed with a 5 to make 0870 5xx xxxx. Mercury Communications (now Cable & Wireless) had a similar scheme, with its numbers beginning with 0541. Like 0990, they were also renumbered into the 0870 scheme, with the numbers becoming 0870 1xx xxxx. Other operators (such as Vodafone) also had national rate codes and were renumbered in a similar way.[break]

When calling 0844 and 0871 numbers, part of the cost of the call is paid to the recipient; this is known as “revenue sharing”.[break]

When originally introduced in 1996, calls to 0845 and 0870 number from BT lines were charged at the same rate as local and national calls respectively. Since that time the telecommunications market in the UK has changed substantially, with BT facing competition from new entrants into the market such as the Post Office and TalkTalk and increasing usage of mobile phones. As a result of this, and the introduction of monthly price plans which include calls to national numbers but not 0845, 0870 or other non-geographic numbers, it is sometimes considerably more expensive to call a non-geographic number than standard national 01 or 02 numbers. 0871/0872/0873 numbers may only be used with a warning about the cost of calling them. The usage of these numbers is regulated by Phonepay Plus.[break]

03 numbers are non-geographic telephone numbers that were announced by UK communications regulator, Ofcom, in February 2007, with allocation starting in March 2007. They are formally known as UK-wide numbers and have been introduced as an alternative to 08 numbers, such as 087x and 084x numbers.[break]

Unlike 08 numbers, 03 numbers cost the same to call as geographic landline numbers (starting 01 and 02), even from a mobile phone.They are also included as part of inclusive call minutes and discount schemes from all major mobile phone and landline operators.[break]

The practice of revenue sharing (where the dialled party receives a share of the cost of the call) is not permitted with 03 numbers (unlike 08 numbers).[break]